This robot dinosaur toy from Zoomer is a collectible robotic edition Zoomer Dino you will want to own.

Straight from Jurassaic World, this Indominus rex remote control dinosaur is a hybrid creation of a number of different species. Capturing the most fearsome features of the Tyrannosaurus, Velociraptor, Carnotaurus, Giganotosaurus, Majungasaurus, Rugops and the Therizinosaurus species, this creature is a force to behold. The name “Indominus rex” means “Untamable King” and in robot form, will be a remote control dinosaur you will want to keep your eyes on. 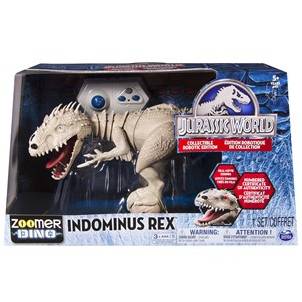 In our review, we will take a look at all the things that make Indominus Rex unique. We will also detail some of what you can expect when caring for Rex and how best to get him to respond to you before you adopt him.

When you play with Zoomer’s Indominus Rex, you will undoubtedly laugh and have fun terrorizing the household but be forewarned that this dinosaur robot may not be too popular with your pets!

If you choose to buy this collector’s edition Indominus Rex, here is what will come with purchase:

If you are a first time buyer of a Zoomer interactive robotic toy, know that this toy will interact with you based on how you play with it and the commands you give it. This toy also has a little independent streak and may act out on his own — always keep your eyes peeled.

Rex will be excitable, will run around, get into things, perform some amazing tricks and will expect plenty of attention from you.

Here’s are the features that make him special: 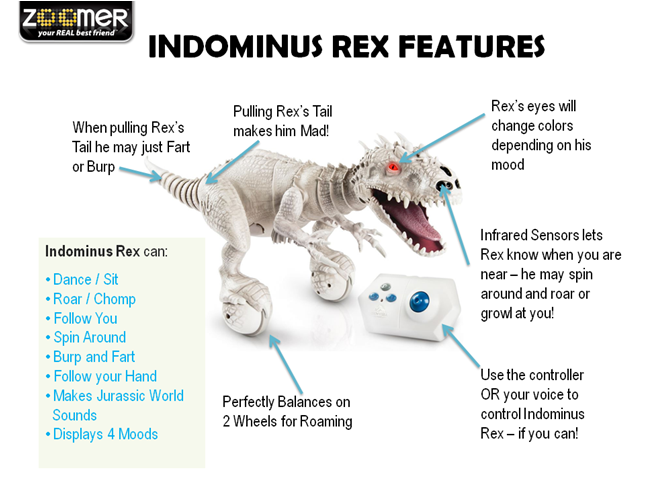 Indominus Rex can be taught tricks and the more he is played with, petted and teased, the more he responds, turning into a true, if not protective, play companion. 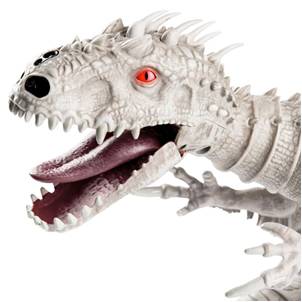 This collectible Zoomer Dinosaur has many features and are what make him so fun to play with. But certain facts about Rex may be nice to know before you make a decision to buy: