When it comes to a child’s love of dinosaurs, the Zoomer robot dinosaur, aptly named “Dino”, can provide hours of fun entertainment while also providing several developmental and educational benefits.

We might mention it also won the 2014 Toy of the Year Award for Best Innovative Toy.

In this review we will provide, in detail, all the features and facts of Zoomer “Dino” and what you can expect when purchasing this technologically advanced robotic dinosaur who comes with plenty of personality and attitude.

This is an interactive toy. Interactive toys introduce kids to a new companion or play experience. In the instance of a toy dog, cat or even a dinosaur, they develop a bond through learning how to train them and generally care for them through play.

The reason Zoomer’s “Dino” is a fun option for dinosaur lovers is that Dino’s interaction, personalities and responses to player commands, change and expand through your type of play — Dino is not completely predictable in his actions which makes time spent with him interesting and engaging.

Let’s start with what’s included in the box with purchase:

Features of the Zoomer Robot Dinosaur

Depending on the age of the person commanding “Dino”, his features will make different impacts. Some kids or pets, may be frightened by his roar while others will laugh at his uncanny timing for farting and burping. Here’s what we think are the features that add to Dino’s fun factor: 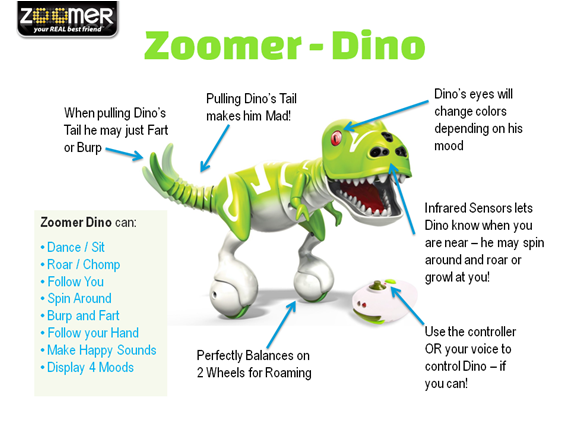 Facts about this Robotic Dinosaur Toy

The features are what usually grab somebody’s attention and this is where product manufacturers focus much of their advertising. There are, however, facts about a product that buyers may appreciate knowing, up front, before buying. Here’s what we think you may want to know about the Zoomer “Dino” toy:

Why Zoomer “Dino” is a Cool Toy for Kids 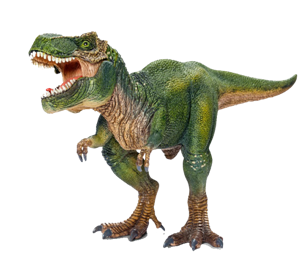 Dinosaurs may be extinct in real life but they are of major interest for young children. Kids are generally fascinated by monsters and dinosaurs were real monsters.

The fact that they are not make believe adds extra appeal for a child. Learning about dinosaurs not only lets a child confront the facts but helps them to conquer their fear of monsters.

Dinosaurs represent power, strength as well as other valuable skills or traits.

In their own way, the Tyrannosaurus Rex and the Triceratops were mighty giants who spent their existance battling for survival.

Their sharp teeth, fierce roar, and tough armored exterior appeal to kids because it allows them to live out their own fantasies of being powerful and being able to defend themselves through role playing.

The power of a child’s imagination in partnership with the potential this dinosaur toy suggests, has no boundaries when it comes to adventure or learning.

Zoomer’s Dino the Dinosaur is a fun toy for all ages. The different personalities displayed by Dino, based on mode of play, make this robotic prehistoric Tyrannosaurus Rex looking toy very engaging and entertaining.

Younger children will learn about dinosaurs, will see they are not necessarily the monsters to be feared and will develop the stepping stones to advanced skills in memory, problem solving, role playing, interaction, and coordination while having fun in the process. How can you put a price on that?

Overall, this toy makes for some serious family fun and is a reasonable value given Zoomer Dino’s features and the broad range of people he will appeal to.

As one of the projected HOT toys for this holiday season, the price will undoubtedly change based on product availability and popularity. The price has been determined by the supplier and not this review website.