Our review will share with you all the details that make this Paw Patrol civil servant truly a special interactive play pal and companion.

Dalmatians, the traditional firehouse dog for more than a century, were initially used as a distraction for the horses of horse drawn fire engines, keeping the horses calm around burning blazes. Years later, Dalmatians would guard the fire trucks and the firemen’s belongings as they battled blazes. 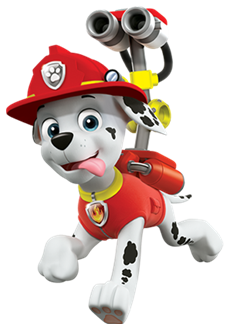 Zoomer’s Paw Patrol Marshall honors the tradition with this robotic dog toy and has modeled him after character “Marshall”, the Nickelodeon Paw Patrol team’s brave firedog – an overly excitable, very active, Dalmatian pup who is always ready to roll.

When you play with Zoomer Marshall,  you will have a lot of fun with his features and going on Paw Patrol missions but younger children playing with Marshall will also gain important educational and developmental benefits as well.

These benefits are outlined farther along in our review.

What’s in the Box?

If you are a first time buyer of a SpinMaster interactive toy pet, know that Zoomer Marshall is a robot Dalmatian dog that will interact with you just about the same way a real puppy does. Marshall will be excitable, will run around, get into things, perform some amazing rescues while on missions, do tricks and in return will expect plenty of attention and love from you.

Nickelodeon themed Paw Patrol Marshall will not need trips to the vet, get into your trash, pee on your floor, shed hair on your furniture or chew up your newspaper . 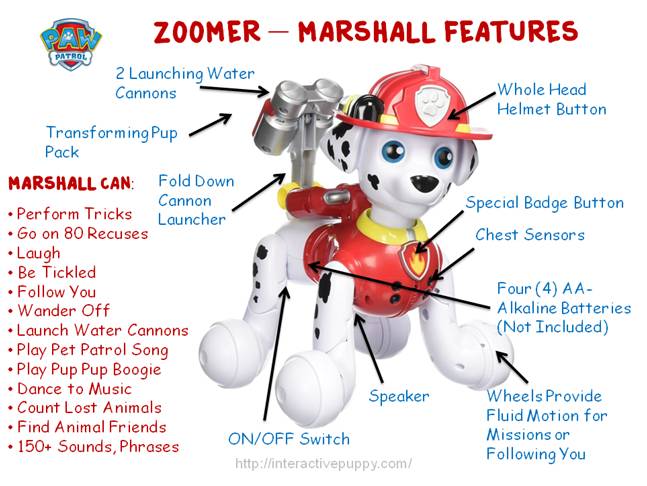 Here’s are the features that make Zoomer Marshall special:

Other than installing the four (4) AA-Alkaline batteries, purchased by you, Zoomer Marshall is ready to roll right from the box with no other assembly required.

For younger kids this little robotic firehouse dog will provide a few benefits, during play, that will work as building blocks for more advanced life skills. 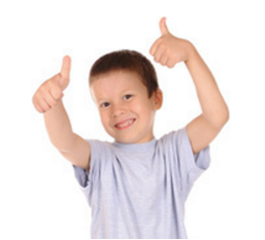 Since operating Paw Patrol Marshall requires a number of steps be performed in sequence and over a period of seconds, this will help a young child with counting. Young owners also will help Marshall count during interactive missions. This helps in developing memory as recall is required to repeat favorite features.

Problem solving comes into play when features do not operate as planned the first time a command is given. It may be because the child did not speak clearly or is too far away from Marshall’s sensors or there is background interference that keeps Marshall from responding. Learning how to work around immediate issues will enhance problem solving skills.

Because there is a learning curve associated with any new toy, a younger child will learn to become more independent and confident in Paw Patrol Marshall’s operation as the child becomes comfortable with giving commands.

Then there are the rewards and the pride a child feels when this little firehouse dog responds happily to their request — how can you put a price tag on that?

GIVE THIS CUTE FIREHOUSE DOG A GOOD HOME