Say hello to Zoomer Pup “Shadow”, who is the original Zoomer’s best friend and can be yours too! How can you resist those adorable perky puppy ears and look of pure delight on his little cocked head?

This cute little interactive puppy provides all the fun of a real puppy in the way he plays and in the tricks you teach him.

In this review, we’ll take a look at all the features of Shadow and what makes him so special. We will also examine the facts about owning Shadow so you can decide if he is the right special friend to adopt into your home.

Playing with Shadow will bring hours of fun but also some developmental and educational benefits for younger children — we’ll highlight those as well.

Let’s start with what’s in the box if you make the decision to buy:

For first time Zoomer buyers, Shadow is an interactive robot dog that acts much like a real puppy — excitable, full of tricks, unconditional love and plenty of mischief.

What Shadow will not do is require trips to the vet, get into your trash, pee on your floor, shed hair on your furniture and chew up your paycheck.

We give Zoomer Shadow a 10 out 10 rating for the cuteness factor but let’s see what technological advancements make this little robot dog a worthy companion for your young pet lover. 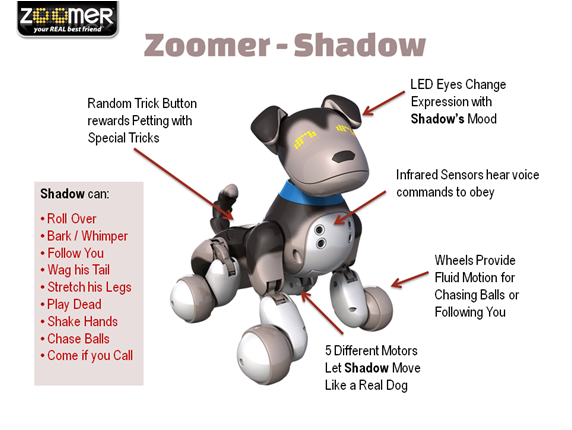 While the features are what usually attract a buyer, it helps to know, before you buy, what it takes to train and care for Shadow before bringing him home. There is a learning curve associated with using this robotic dog to its full capacity so here’s what we think you should know.

For younger kids this little interactive dog will provide a few benefits, during play, that will work as building blocks for more advanced life skills. 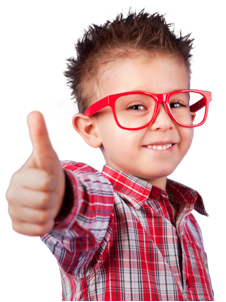 Since operating Shadow requires a number of steps be performed in sequence and over a period of seconds, this will help  a young child with counting.

It will also help in developing memory as recall is required to repeat favorite features.

Problem solving comes into play when features do not operate as planned the first time a command is given. Either it’s because the child did not speak clearly or is too far away from Shadow or there is background interference that prohibits Shadow from responding. Learning how to work around immediate issues will enhance problem solving skills.

Because there is a learning curve associated with any new toy, a younger child will learn to become more independent and confident in Shadow’s operation as the child becomes comfortable with giving commands.

Then there are the rewards and the pride a child feels when this puppy responds happily to their request — how can you put a price tag on that?

This is a featured packed little interactive puppy toy with lots of personality and guaranteed to generate more than a few laughs in addition to hours of play.

There is a learning curve required to fully utilize all the tricks and moves this busy little electronic marvel has to offer. Patience is key because he will not be fully functional in terms of commands on a full charge.

He will need to be taught to recognize commands and this may frustrate some users. The rewards, however, when both you and Shadow become accustomed to each other, is well worth the effort.